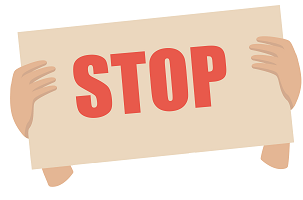 There are several possible ways to stop on a word ending with a vowel however in this work we will focus on three of these ways only.

الرَّوم  (Rawm): The linguistic definition is “the request”. Technically, it is weakening of the sound when stopping on a dhammah or a kasrah so that most of the sound disappears.

When weakening the sound of rawm, the sound is diminished until it reaches only one third of the full vowel count.  The reciter slightly lowers his or her volume such that only the one listening closely will be able to distinuish it.  Stopping with Rawm can be done with a dhammah (ُ  ) or dhammataan (ُُ  ); or Kasrah (ِ  ) or kasrataan ( ٍ  ). Rawm is not done with fatha or fathataan however due to its weakness; If a little of it is emitted, then all of it would be emitted.

Things to consider when stopping with rawm:

الاشمام  (Ishmam): is circling of the two lips, similar to when pronouncing a dhammah, without sound. The gesture should occur directly after saying the letter with sukoon to indicate that the original vowel was a dhammah.

Things to consider when stopping with ishmaam:

There are several other ways to stop that aids one in obtaining precision in the recitation; Thus it is important to always increase in study and implementation to achieve this noble goal, beithnillaah.

Tajweed with a Junior Student